This originally appeared on MojoLingo's Blog.

Vagrant is a wonderful Open Source tool that automates downloading a base OS virtual image, setting it up for what you need, and sharing access into the machine with your local computer. From simply running a single service in a virtualized box you don’t want to install on your own machine, to building complete sandboxes for a complex app to run inside, Vagrant makes setting up an environment a breeze.

This post talks about using the Telephony Dev Box to set up a Ruby box with some gems and Asterisk or Freeswitch – but Vagrant could easily be used to make your life easier no matter what app you’re developing.

Telephony Dev Box (affectionately referred to as TDB) is a Vagrant environment that lets you get started writing voice applications right away (preferably in Adhearsion, without wasting a month of Saturdays learning which mods to include or not when compiling FreeSWITCH from source, or how to configure a SIP peer on Asterisk.

Before you install Vagrant, you’ll need to install VirtualBox. Download and install the version for your system from the VirtualBox website.

Vagrant has recently switched to being installed like via an installer, like other end-user tools.. Just go the Vagrant Download page and download/run the appropriate installer for your system.

Get the Telephony Dev Box and start it up

These steps are taken straight from the TDB README.

Use the Telephony Dev Box to connect an application

Since Adhearsion itself doesn’t have too many tricky dependencies, I prefer to run Adhearsion apps on my Mac instead of inside a virtual machine, but for the sake of this guide we’ll run the app inside.

There are plenty of options for software VoIP phones you can use – Blink and Bria are popular choices at Mojo Lingo, while I personally tend to use the free/open-source Jitsi. For this post though, we’ll use Telephone, since it’s about as simple as you can get.

Install the software, and then go to set up a new account. TDB sets FreeSWITCH up with users 1001-1010, all with the password 1234. The freeswitch domain is freeswitch.local-dev.mojolingo.com, so set it up like this: 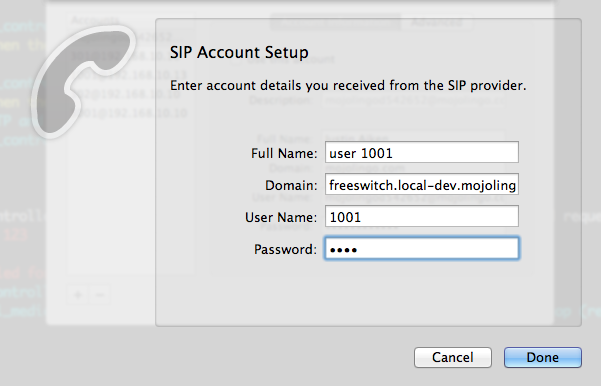 Now that you have a blank slate app connected to a telephone engine, do something unique and innovate!

Next time you pick up a project where you are going to need lots of dependencies to run the application, such as RabbitMQ, graphite, an XMPP server, an indexing service, or a telephony engine, don’t sigh and start looking for brew packages and writing Foreman scripts; just find a Vagrantbox to do all that for you so you can focus on what we like to – write code to create software!

I'm a Ruby/Rails developer currently working for UserTesting, living in Southern Utah. More about the author →